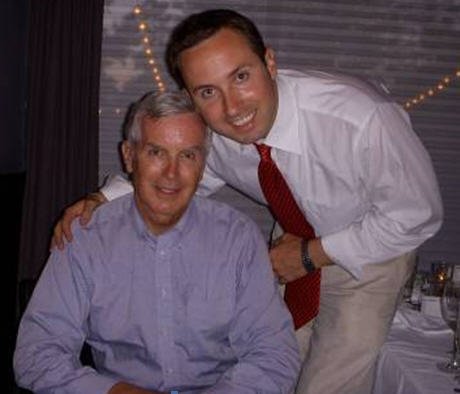 In this article, I want to briefly share with you my experience as a paid professional tax preparer, so that you can have an idea of why I myself have enjoyed working in this field and be able to decide if becoming a tax preparer is a good option for you.

Over time, we plan to add other stories of people who are making tax work work for them. But for now, I’ll start out by telling you my story.

My grandfather, Wayne, started Pronto Income Tax way back in 1965.

My father, Kent Frye, took leadership of the business in 1972, in partnership with his brother, Mark.

I worked intermittently in the family business as a kid folding envelopes, drawing pictures, and on a few happy occasions counting the contents of the petty cash envelope and writing the result in pencil on a scrap of paper.

While I always respected what my Dad did for a living, and I always knew that he worked hard and formed great relationships with his clients and coworkers, I never thought I would follow in my Dad’s footsteps and do taxes for a living.

After graduating from Santa Clara University with a Bachelor’s of Arts in English, I started work as a reporter at a business and finance magazine.

By age 22, I was publishing articles in a magazine with a sizeable readership, and I appeared on my way to becoming a successful journalist. My ultimate dream was to become a novelist, screenwriter, and all-around stud writer.

Joining my father’s tax business was not on my agenda.

However, after being laid off from my cushy magazine job in 2001 after the World Trade Center attack and subsequent economic collapse, I clearly saw that journalism, particularly print journalism such as newspapers and magazines, was not necessarily an industry that would, in future years, offer me the kinds of opportunities that I wanted.

The Downside of Working for Someone Else: They Can Fire You

I realized that by working for someone else, especially in a declining industry like journalism, I would always be at risk of losing my job … and I realized that I would have other people telling me what to write.

I realized that I wasn’t interested, long-term, in having a boss or any sort of conventional 9-5 job.

But at the same time…I didn’t have a lot of options. It was likely to take a while for me to be able to make any money from my writing, and the economy was in terrrible shape giving me very few choices about how to sustain myself until such as time as I was able to support myself by writing.

And so, in the fall of 2001, as I sat there in my apartment searching the desolate Internet job boards, unemployed with no real job prospects on the horizon, my father’s income tax business began to look appealing.

I could work like a slave for three months of the year, and then for the rest of the year, I could write, read, go to the beach a decent amount, and have some degree of freedom.

Plus I’d get to work with my Dad.

My Apprenticeship as a Tax Preparer

In November of 2001, I signed up for the H&R Block® Tax Course and then in January of 2002, I started work for Pronto Income Tax of California, Inc. at our Monrovia location.

I was privileged enough to have, in the Monrovia office, a terrific mentor and teacher in Casimiro “Jesse” Pena, who was by that time an experienced tax pro.

Jesse taught me the ropes and I started banging out tax returns as a paid professional tax preparer.

Somewhat to my surprise, because math was never my favorite subject (I was an English major in college after all), I learned the tax business quite quickly and by my second year, I was serving hundreds of clients and I was making decent money.

I was paid the same rate as our other preparers, a 33 percent commission, and because of my speed at doing taxes, I calculated that I was making about $20 per hour during my second tax season, which for me at the time wasn’t too shabby at all.

Meanwhile, once April 15th rolled around, I was able to pursue my writing full-time, and I had enough cash in my pocket from tax season plus unemployment insurance to (more or less) last me throughout the year.

Hey, it was better than starving!

Settling In as a Tax Pro

Although it definitely has not been a pleasure cruise and there have been many moments wherein doing taxes has been a form of turture, I liked this lifestyle well enough to continue it for the next ten years.

Meanwhile I clearly saw that there was a relationship, in the tax business, between how much I learned and how much I earned. The more I knew, the more I could help my clients.

Therefore, I tried to keep educating myself about the tax system so that I could help my clients be well-represented in any interactions with said system.

In 2008, I passed the Enrolled Agent Examination to be able to officially represent clients in IRS audits.

Also in 2008, after years of anonymous struggle and rejection, I was lucky enough to start earning some money from my writing. At long last, I had a bit of year-round income going, instead of just living off my tax season take and unemployment.

Also in 2008 (a busy year), I got married to a great woman named Jamie who could handle my long and arduous tax season hours.

In 2009, we were able to purchase a home, which was a very exciting accomplishment.

Now, obviously since my father is the owner of the company I work for, I had and have certain advantages that not every new tax preparer will enjoy. I benefited immensely from my Dad’s work and also his leadership of the company and the example he sets.

By the time I joined Pronto Income Tax of California, Inc., we already had an excellent client list thanks to the hard work of my father, my uncle Mark, and all the great employees of Pronto who worked so hard to build those relationships.

Not every tax preparer will be able to step in the door and already have hundreds of clients lined up, many of whom clients know your dad and are thus more willing than normal to give “the new guy” a chance.

However, at the same time that I accept that my story isn’t necessarily typical, I do not feel that the special advantage I enjoyed when I started my career as a tax consultant is so special that my story does not have any relevance to you, someone who may be considering starting a career in the tax game.

On the contrary, I firmly believe that anyone who works hard, constantly keeps learning, and knows how to give great client service can have good success and make really good money preparing tax returns.

Income Tax Preparation Is a Need, Not a Want

Always remember: people are required to file tax returns, it is not an optional activity, and millions upon millions of people every year need help filing those tax returns. It’s not optional, people have to do it, and the government doesn’t make iteasy. And there are billions of dollars at stake and thousands of pages of laws that you’re supposed to follow.

Sounds like there could be a few spare dollars sloshing around here somewhere!

If you are excellent at helping people deal with their income tax reporting and payment obligations, you can almost guarantee that you’ll be able to bring home a stack of cash at the beginning of each year–that was the conclusion I came to.

I don’t know of too many other businesses that offer that kind of certainty, year in and year out.

Aside from the money, though, which is at this point respectable but not at all outlandish, what I really love about doing taxes is working with clients. It is extremely satisfying to meet people, see how they are making their living, and see how you can help them with their tax situation.

This is an often misunderstood part of the tax business: you may think it’s about numbers, and yes there are numbers involved, but really it’s a people business.

To be a trusted advisor that helps clients save money is a thrill for me and the best part of my job. Plus I get to work with my Dad.

With all that in mind, I’d have to say that the tax business has been good to me.

With Pronto Tax School, I hope that I can help other people discover a potential new opportunity that may be good to them and their families, just as the tax business been good to me and my family.

If you have a tax preparation success story you’d like to share with people who are considering starting a career in the tax preparation industry, please email your story to us.

As noted up top, we’d like to add more stories to this section over time, so that potential tax preparers can have a realistic idea of the benefits and challenges of tax preparation work.